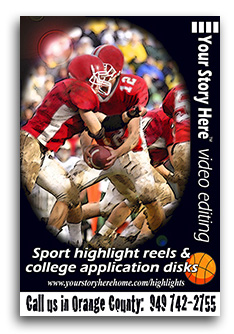 If you are looking to put together a sports highlight video, a music or dance compilation, or a college recruiting tape, then start with good video. The editing process can improve a lot of things, but the better the images, the better your show reel and the better your chance at an athletic scholarship.

Three Phases
There are three phases to creating an effective sports highlight reel. The first is to capture good video. The second is to select the best plays. And the third is to compile the material in your video editing program in the most effective way possible. This article tells you how to shoot the best sports video possible. Now, you may not be able to tick the box on every one of the following tips, but do as much as you can and you will be more than happy with the results.

Once compiled - with music, captions (showing the game information), transitions, and spotlight effects (to ensure that the featured player stands out) - a sports recruiting video can be output to DVD, flash drive or uploaded to the web. If you plan to make a DVD, it's also a good idea to put together a handsome DVD box cover so that the sports highlight disk is not lost among all the other stray disks that seem to accumulate on coaches busy desks! So, let's go!

1. Review pro sports video
Before you shoot, it's a good idea to look at some pro footage relevant to your sport. Between TV, cable and YouTube, you should be able to find your particular sport. Since you are going to be doing the filming, look at it from the point of view of the camera operator. What kind of framing did they use? What was their point of interest at the start of each play? How did they mix it up?

It's also a good idea to review a fully edited sports highlight video - to get an idea of how long each play is typically featured on a highlight disk and to see how the final product fits together.

2. Use a decent video camera
The better the camera - the better the pictures. What is a really good video camera? Leaving aside the kind of pro-gear that ESPN uses, a good video camera will have 3 CCDs (charge couple devices) - each one capturing image information from either the red, green or blue color channels. Capturing each color on a separate CCD gives better color separation and a much clearer picture.

A good camera will also have a generous optical zoom - 10X or 12X is sufficient for pretty much most amateur sports - but 20X is nice to have. But don't confuse optical zoom with digital zoom. Optical zoom will deliver clear pictures at the maximum extension. Digital zoom beyond the limit of the video camera's optical zoom will simply interpolate (read "invent") pixels to give you the illusion of increased detail. Most pros keep their digital zoom off at all times.

High Definition? Sure, nice to have - but the massive size of the video files you create may gum up the works when you come to edit. Editing in HD brings its own peculiar challenges that really demand the fastest computers and largest hard disks. Not everyone can play Blu-ray disks on their home equipment yet. And as far as recruiting videos and athletic scholarships are concerned (and this may change in the future) it is still safer to avoid HD and send a standard definition DVD.

Don't get too hung up on tracking down that distant cousin who shoots weddings and has a nice new "prosumer" camera. Almost any modern video camera will do the job for you - provided you know how it works!

3. Always use new tapes and record in "SP" mode
Digital storage that the newer video cameras feature is almost always great; and miniDV tapes work fine. But avoid recording in or outputting to old, analog, and low resolution formats.

If using digital tapes in shooting your sports video, always use new tapes. And record in "SP" (short play) mode. Sure, you may need to change tapes during the game, but you will be more than rewarded with higher quality pictures.

4. Game day: Position yourself around the center line - but vary if you can
For most sports, you should be able to take up a position in the stands. For a day game, make sure the sun is behind you. Usually, the best spot is around the center line - nice and high up. If you have the luxury of filming a player who sees plenty of action, then you may want to vary your position (either during the game or in another game). Shoot some film from the sideline and maybe some from one end (depending on the sport of course). When you come to edit your highlight reel, it is always nice to have a selection of shot angles.

5. Indoors, night games and cloudy days are OK
Modern video cameras have remarkable low-light capabilities. You should have no trouble if you want to record sports highlights at indoor fixtures or even at night games or on gloomy days.

Sunny days are fine for shooting sports too. But keep in mind that in the middle of the day the sun will create strong shadows and bright highlights - and no video camera can capture the whole full-sun tonal range that our eyes just take for granted. That means that you will probably lose some detail (particularly in the players' faces) when shooting video in the middle of a sunny day.

6. A tripod is superior to "steady shot" settings
You need a tripod. A tripod ensures a steady, un-jumpy shot and a nice, level picture. You level the video camera by looking at the view finder and lining up the top of the frame with the horizon - or some other level object in the background; then adjust leg lengths (a good tripod will have a little spirit level in its base).

If you are shooting from the bleaches with a tripod, then position two of the three legs on the lower step and the other - shortened by 10 inches or so to level things up - on the upper step.)

Some cameras have a "steady shot" function that can compensate for a shaky picture. But it does not work nearly as well as a tripod and you should turn it off when you have a tripod. Tripods are cheap and all the obvious stores sell them (even Staples has one suitable for a video camera for $25).

7. Record the whole game
You can never predict when that magic play is going to happen - so record the whole game while your player is on the field. In most cases, you will want to record a whole bunch of games to give you the widest possible selection of plays to include in your highlight reel or college recruiting video.

8. Avoid auto-focus for long shots
Auto focus makes pros of us all. But the risk of using auto focus when shooting sports from the bleachers is that people stand up in front of the video camera or they move down rows in front of you and your camera auto adjusts to bring them into focus - like you care! So, if possible, lock your focus this way: switch to auto focus and point towards the center of the field or the court; then zoom in and allow the focus to adjust - then turn auto focus off. The video camera should stay focused on that distance for the whole game.

If you are shooting close up - say you are now on the sidelines - then the action will probably be changing rapidly and you are safer to stay on auto-focus settings.

9. Check your white balance settings
Different light sources have different color temperatures. Depending on your video camera settings, natural light can appear blue, florescent lights can throw a green cast, and indoor stadium lights can look yellow. Sports highlight videos are sometimes compromised by an improper color cast - the most common one is a yellow tinge from indoor lights.

When shooting a whole sport outside, if you expect that light conditions may change (e.g. clouds drifting across the sun) then it is safest to use the auto setting.

10. Improving audio
The best audio is captured from the sidelines. We have all seen those fancy audio dishes that ESPN uses to isolate player sound and impact noises, especially at football games. Shooting (and recording audio) from the stands means you will get a lot of crowd noise but not a lot of field noise.

What can you do to improve audio? You could run a separate camera from the sideline and use it for audio - then combine that audio with the video from your camera in the bleaches when you come to edit. Or, you could buy a cheap "shotgun" mic., hook it up to the mic. jack on your camera, and point it towards the play - cutting out a lot of the crowd noise either side. But in most cases, these suggestions will be more trouble than they're worth.

11. Optional footage
It never hurts to get some additional shots of the day - like a short interview with the player before or after the game, or a shot of the outside of the venue (called an "establishment shot" in the trade), or a shot of the score board or the team supporters (crowd, mascot, cheerleaders, band, etc). If you are planning on making a college recruiting tape, then you will use these additional shots very sparingly since coaches do not want their time wasted with endless "beauty" shots.

12. Finally, check your footage early!
At the first game break, check your footage to see what it looks like and that you have audio. Make any necessary adjustments. (There is more than one video pro who has returned from a sports highlight shoot with blank or compromised-quality tapes because they neglected to check while they still had a chance to fix the problem!)

And, once the game is over, flip the protection tab (if using tapes) so you cannot record over - and mark the tape with the details of the day and the game.