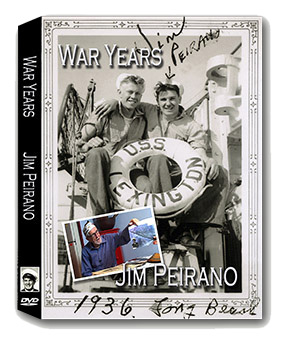 The incredible story of Jim Peirano from Orange County whose veteran's story we had the honor to record and help tell.
The release in 2010 of "The Pacific" - the Spielberg/Hanks' HBO 10-part veterans video about ordinary soldiers fighting the Japanese in WWII - put the spotlight back on "The Greatest Generation". With around a thousand WWII war veterans now dying every day, it also challenged us to ask if we are doing enough to save our own families' old soldiers' stories, by way of video or oral history interviews.

Telling the story of a war
How do you tell the story of a war? Thucydides and Xenophon wrote of kings and campaigns and the rising glory of the ancient Greeks. And ever since those Pre-Christian times the "great man" theory of history has largely held sway. But battles are fought by ordinary men and women; and especially since the 20th Century, sacrifice and destruction in war have been painfully shared by all of society. So a narrative which focuses on the geniuses running the show isn't quite the full picture.

As a result, recent documentary and dramatic veterans videos have focused on the soldier (think "Dunkirk", "Band of Brothers", "Saving Private Ryan") and on the home front (think Ken Burns' "The War"). And this is how it should be. The larger purpose of battles and war must never be ignored, we must be clear on the geography, and the political leadership deserves air time - but it is the story of the common soldier which commands our attention. Because the common soldier is us - our brothers and sisters, our parents and grandparents. Their sacrifice is our sacrifice.
One of the best of the recent crop of veterans' video - "The Pacific" - carries on this new, more democratic, movement and the stories it tells are based on the real life experiences of actual soldiers serving during World War II in the 1st Division. And for many veterans in the audience, many of the older viewers especially, the video will bring back painful memories of terrible privations and lost comrades. And it will raise the question of whether we have done enough to preserve the stories of the old soldiers close to us.

Sitting down with a soldier
Some people have already sat down with the old soldiers in their family, interviewed that person, and made a veterans video - a video and audio recording of the fear, the boredom, the weary perambulations, and the occasional glory of war experience. These can be done at home with a minimum of fuss and technology; or there are people specializing in this kind of work who produce something a little more elaborate with carefully researched interviews with war veterans, combined with personal and archive images, maps and even narration.​
Veterans History Project
And since 2007, the Veterans History Project - an initiative of the Library of Congress and the American Folklore Center - has been collecting, preserving, and making available the personal accounts of all American war veterans "so that future generations may hear directly from veterans and better understand the realities of war". The Project encourages the submission of personal accounts, interviews, veterans audio, veterans video, written memoirs and photos and documents. And they provide a "Field Kit" to assist interviews and a "Memoir Guidelines" for those veterans writing their own account. The Veterans History Project also welcomes stories from the "home front".
​
​You may watch the now-classic WWII series "The Pacific" - $200 million for its making - and marvel at the sublime agony of battle, and the day-to-day challenge of surviving on hot, barren, volcanic islands whose names are largely forgotten and whose locations the folks at home - and even some serving - only ever had a sketchy idea about. And your thoughts might turn to the veterans in your own family. Recording a veterans video honors old soldiers and creates a valuable family history documentary. And when you take the trouble to send that veterans video to the Veterans History Project at the Library of Congress, that old soldier's story will take its rightful place in our Nation's Archives. You will have saved an Old Soldier - for ever more.
Home | Biography | Veterans | Events | Funerals | Blog | Video Editing | News & Awards | Business Biography | FAQ | Samples
Genealogy |Testimonials | Photo Restoration | Gift Boxes | Web Research | Alzheimer's | Links| Contact Us
Copyright 2011-2020 | Your Story Here LLC.